Leduc Gold Project Property is located approximately 3 km south of Jellicoe, Ontario, within the Thunder Bay Mining Division. The Property consists of a total of nine unpatented mining claims (114 cells) and covers an area of approximately 2,290 hectares. The Property is situated within the Beardmore-Geraldton Gold Camp which has historic production of 4.1 million ounces of gold, providing excellent exploration opportunities. Local mineralization is significant. Reports of gold mineralization associated with fractured and quartz veined iron formation, sulphide replacement of magnetite and grunerite alteration. These are signature indications of the Banded Iron Formation Gold Deposit Model common to the Beardmore-Geraldton Gold Camp. The Infrastructure located near the Leduc Gold Project includes the Trans-Canada Highway, hydro-electric power and a natural gas line all parallel to the bordering Highway 1.

Gold was first discovered in the Camping Lake region in 1925 leading to the development of a transportation route between Sioux Lookout and Camping Lake. This route opened the Confederation Lake greenstone belt to prospecting and exploration which resulted in the discovery of several gold deposits which were put into production between 1930 and 1940.

The Leduc Gold Project is hosted within the Beardmore-Geraldton Greenstone Belt (BGB) of the East Wabigoon Subprovince. The BGB is comprised shear-bounded interleaved metasedimentary and metavolcanic units that have undergone at least four deformation events. Through most of the 1930's through to the end of the 1960's the Beardmore-Geraldton Gold Camp had produced over 4.1 million ounces of gold and 300,000 ounces of silver from 20 different gold mines at an average head grade of 7.54 g/t Au. These gold deposits are classified as orogenic lode gold deposits that occur in brittle-ductile structurally related regimes similar to the Kirkland Lake Gold Camp, the Timmins Gold Camp and the Pickle Lake Gold Camp to name a few. Orogenic gold deposit types should be the focus of future exploration activities on the Property.

Orogenic lode gold deposits throughout the world show very distinct clustering along major lineaments and deformation zones (shear zones) which tend to be crustal scale, terrane bounding features. Kerrich and Feng (1992) summarize: "The giant quartz vein systems with lateral extents of tens of kilometers and up to 3 km in depth are hosted in brittle-ductile shear zones and are restricted to terrane boundaries. These are regional structures that cut through the lithosphere, but are usually recognized at strike-slip fault, duplexes and second and third order splays at mid- crustal levels."

Click here to read more about the Leduc gold property 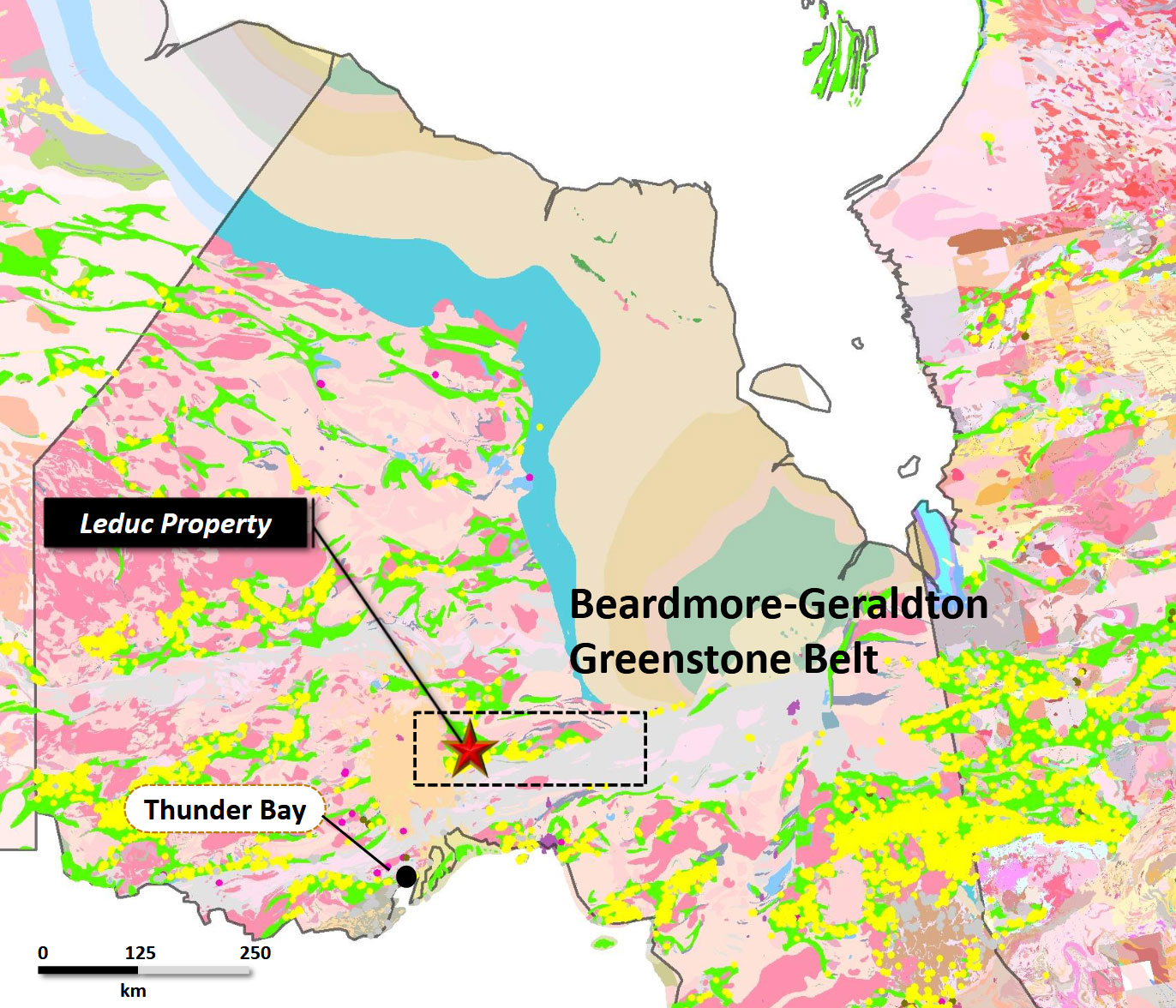